Natalie Dean, Ira Longini and colleagues have published an article “Zika virus: Only a few small outbreaks likely to occur in the continental US” in the academic news website, The Conversation.

Here is a noteworth excerpt from the full article:

Based on current data, our model projects only small outbreaks from mosquito transmission in the continental U.S. that are likely to die out before spreading to new areas. Alabama, Arkansas, Georgia, Louisiana, Mississippi, Oklahoma, South Carolina and Texas are at risk of these small outbreaks. This is because it is warm enough in these states through the summer and fall to sustain mosquito transmission.

But the median number of daily cases from local mosquito transmission in these states is projected to be zero. This means that in general we do not expect an outbreak to happen, though small outbreaks are possible. Any outbreaks in these states are expected to end by November or December 2016, consistent with declining temperatures and the end of mosquito season.

Florida, on the other hand, may observe sustained transmission between September and November 2016. After calibrating the model with available surveillance data through mid-August, on average, less than 100 symptomatic Zika cases are projected by the second half of September. As many as eight pregnant women could be locally infected in the first trimester, though these women would not give birth until October 2017. In comparison, over 671 pregnant women infected during travel have already been identified in the U.S. as of September 1, 2016. And, as in other states, when mosquito season ends in December, so will Zika transmission from local mosquitoes.

The research group, made up of physicists, biostatisticians, and computer scientists, created mathematical and computational models that account for mosquito populations, human mobility, infrastructure and other factors that influence the spread of Zika.

Their current work suggests that while more cases of Zika can be expected in the continental U.S., outbreaks will probably be small and are not projected to spread. By contrast, some countries, like Brazil, have already seen widespread outbreaks.

There is also an interactive website http://www.zika-model.org/ where you can view model scenarios for certain countries. 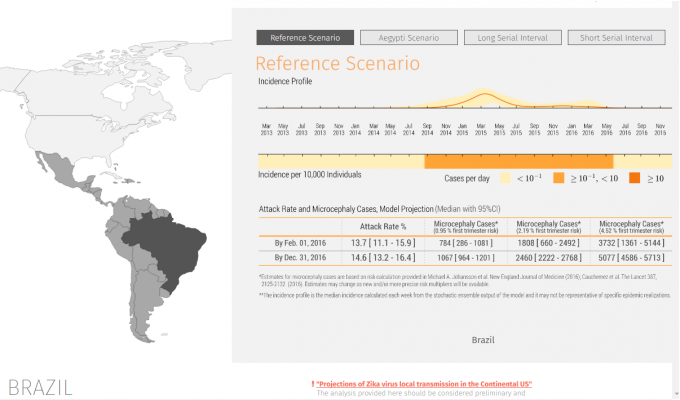 Other Zika related work was recently highlighted in the UF News article “Non-travel Zika cases in Fla. could approach 400 by summer’s end.”