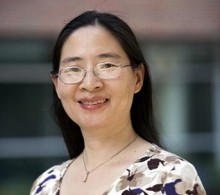 She earned her masters in mathematics and statistic science at the University of Florida in 2007 and 2008 and graduated with her doctoral degree Summer C 2012.